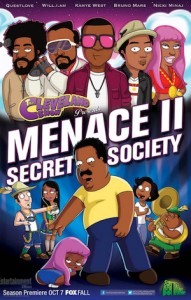 Hip-hop/pop dignitaries Kanye West, Nicki Minaj, Bruno Mars, Questlove and will.i.am and will invade the small town of Stoolbend, Va., next fall on ‘The Cleveland Show.’ The group will appear on an episode titled ‘Menace II Secret Society,’ in which the five celebrities are supposedly part of the secretive “rap illuminati.”

The poster for the season premiere was unveiled at Comic-Con this past weekend showing animated versions of Yeezy, Barbz, Questo, will and Bruno. It also shows an irate Cleveland getting ready to pull the pink-colored wig off his mischievous son Rallo.

The episode will mark West’s fourth time as a guest on the popular ‘Family Guy’ spin-off. According to the show’s producers, the plot is about the five artists who are part of the rap illuminati and their mission to control pop culture. Sounds like real life to us?

“Cleveland inadvertently breaks into it and then it’s how he will either bring them down or they’ll bring him down,”explains executive producer Rich Appel of the story line. “We have a couple of original songs with Kanye and will and Bruno, I mean, all of them, it was great.”

Fox will premiere the fourth season of ‘The Cleveland Show’ on Oct. 7.