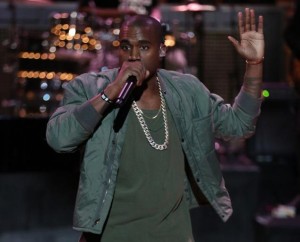 We no longer have to wonder what Kanye West thinks of Ray J’s Kim Kardashian diss “I Hit It First.” West responded Monday when performing his song “Bound 2” during a surprise performance on “Late Night With Jimmy Fallon.”

“Brandy’s little sister lame and he know it now, when a real brother hold you down, you supposed to drown,” West rapped.

West didn’t mention Ray J by name, but there is no denying that the lyrics are about him. West instead chose to refer to the Ray J as the younger sibling of Grammy-winning singer and actress Brandy.

The original lyric is, “All them other n-ggas lame and you know it now, when a n-gga hold you down, you supposed to drown.”