Kanye Not Happy With SNL Skit 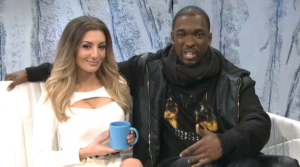 Kanye West is furious that he and baby mama Kim Kardashian were mocked onSaturday Night Live this past weekend.
In the skit, “Waking Up with Kimye,” Jay Pharaoh and Nasim Pedrad took on the roles of Kim and Kanye, completely mocking them  — the whole thing based around the word “genius,” which Kanye uses frequently.
“Kanye was not happy about being dissed, he doesn’t think any of it is funny,” a source close to the singer told HollywoodLife.
“He considers them to be one of the most influential couples that has ever existed. He might just refuse to go back on SNL ever again.”
Lady GaGa, the host of the evening, joined the segment as an Apple employee who worked at the Genius Bar. Kanye, naturally, told her that she didn’t deserve the title of “genius,” and that he and Kim did — they even threw in an “I am God” statement.