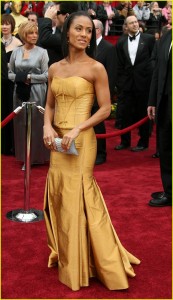 Jada Pinkett-Smith addresses “the most persistent” rumor in a new interview with HuffPost Live: that she and husband Will Smith have an open marriage. No, I think people get that idea because Will and I are very relaxed with one another,” the actress says when asked about the speculation — before going on to reveal she’s told “always told Will, ‘You can do whatever you want as long as you can look at yourself in the mirror and be okay.’”
“Because at the end of the day, Will is his own man. I’m here as his partner, but he is his own man,” she explains. “He has to decide who he wants to be and that’s not for me to do for him. Or vice versa.”
Pinkett Smith, who has been married to the Oscar nominee since 1997, also says her hubby is her “best friend,” which has made their marriage easier.  I don’t think it’s easy to be married to anyone. I think that you have to go into a relationship knowing — especially when you’re dedicating to someone for the rest of your life — this is a life partnership,” says Pinkett Smith.
She adds, “He’s my best friend. He’s been by my side through some of the most difficult parts of my life. And so that’s something you can never take away.”
“One thing is for sure: I love him deeply,” Pinkett Smith says.