IS RIHANNA GETTING DEATH THREATS? 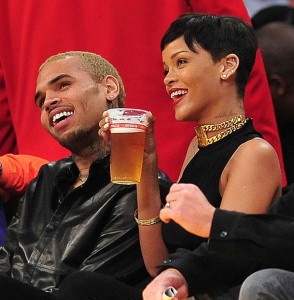 Rihanna & Chris Brown may be back together but it apparently has come at a huge cost for the singer and she’s now receiving a high volume of vicious death threats that have her worried.
The couple’s rekindled romance is in its best shape ever, with both RiRi and Chris Brown recently gushing about their renewed love for one another and their plans for the future, but it seems not everyone is happy about the reunion and have taken it upon themselves to share their opinions with the star with death threats.
According to Heat magazine, the 24-year-old singer has been receiving a torrent of abuse via Twitter over the last few weeks, leaving her wracked with nerves and her management fearing for her life.
“Rihanna is scared. Her management has taken these threats very seriously and has ramped up her security team. The level of vitriol aimed at her since her reunion with Chris Brown is unbelievable,” a source told the magazine.
The full force of the Roc Nation star’s security team was clear to see during her brief stay in London last week where she was the guest of honour at a River Island bash to celebrate her new fashion collection.