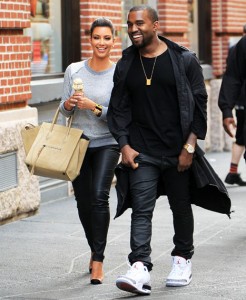 According to New York Daily News, “About to be struck down? Kanye West.
West’s majorly successful career as a rapper survived interrupting Taylor Swift at the VMAs and insulting a sitting President during a Hurricane Katrina telethon, as he had a hit with his next album, “My Beautiful Dark Twisted Fantasy,” which debuted at number one on the Billboard 200 chart.
But a source tells Confidenti@l that West’s popularity is waning and he has become tainted, with too many appearances on “Keeping Up With the Kardashians,” pictures in the celebrity weeklies and a girlfriend unwelcome in the world of high fashion.
Once gracing the pages of VMAN and GQ, his face is now splattered all over whatever Kardashian is promoting.
“His personal life is overpowering his music,” an industry source says. “Every time he plays, people are wondering if Kim is going to be there. It’s not a good thing for him, especially if he wants to be taken seriously.”
Kardashian is also affecting West’s income. The rapper was offered several opportunities to host New Year’s Eve parties in Vegas and Miami — but only if he would bring Kardashian. West declined the offers.
“Kanye was actually offended by the offers,” says the source.
In the beginning of their relationship, West tried to put his foot down when it came to appearing on the Kardashian family’s shows. “He made it clear to her he doesn’t want to be on her show, but Kim gets upset so he caves in,” adds the source.
Sales for West’s upcoming show at Revel in Atlantic City are “not close to being sold out,” says one ticket broker. But the latest sign the public is turning against West was when a massive portion of the audience walked out during his performance at the Dec. 12 Hurricane Sandy benefit concert at Madison Square Garden — and collectively dissed his kilt.
“Literally half the audience got up to go to the bathroom and it was the talk of the men’s room,” one attendee told Confidenti@l’s Marianne Garvey.”