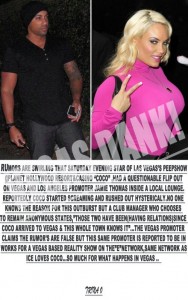 There’s an anonymous email with the photo above from someone who claims to have information about actor and former rapper Ice T’s wife Coco and ANOTHER man. Now this would be the 3rd man in less than 6 months that CoCo has allegedly cheated on Ice with. I don’t know how true this is. The picture has the name “Vegas Dank” on it. It may be a blog, website, or topix forum for all I know.
Vegas Dank reports:

Coco allegedly started screaming and rushed out hysterically after an argument with Thomas. No one knows the reason for the outburst. But a club manager who chooses to remain anonymous states,”Those two have been having relations since CoCo arrived to Vegas and this whole town knows it.”
The Vegas promoter claims the rumors are false but this same promoter is reported to be in works for a Vegas based reality show on E! Network”………