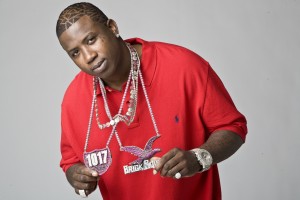 Damn, I hate to hear about ish like this……

From Rolling Out, “Atlanta rapper Gucci Mane is planning to perform in Macon, GA on Dec. 21, but there may be trouble waiting on him once he travels down I-75. An as-of-yet unspecified party has issued a threat to the rapper and ordered him to stay out of the city.
And the bad blood goes back to 2005, when Gucci, born Radric Davis, was attacked by men at a house in Decatur, GA. Gucci and his associates opened fire on the men, and one of them, a man named Henry L. Clarke III, also known as rapper Pookie Loc of Corporate Thugz Entertainment, was killed. CTE is rapper Young Jeezy’s imprint label. The body of Pookie Loc was found in a nearby elementary school. Gucci subsequently turned himself in and claimed he only shot Clarke in self-defense. The charges were later dropped due to insufficient evidence.
Gucci and Jeezy’s feud began over a dispute regarding the rights to the 2005 single “Icy,” but have intensified in the wake of Pookie Loc’s killing. Gucci affiliates have asserted that the Decatur attack was in response to the earlier financial dispute.
But Pookie Loc was a native of Macon, GA., and unnamed individuals, believed to be gang affiliates, have made it clear that Gucci is not welcome in their town