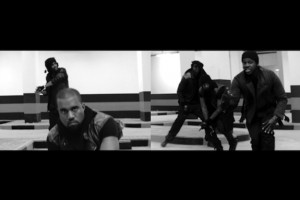 At center stage in the wide-screen black-and-white video is the Lamborghini Murcielago. The ultra-luxury vehicle is parked in the middle of a futuristic parking garage as the G.O.OD. Music rappers swag out in front of it. Big Sean, wearing a turban-styled headpiece, spits his rhymes first, followed by Pusha T, then Yeezy and 2 Chainz wrapping it up.

If you look closely, you will see other G.O.O.D. Music members dancing and flossing in the clip, including Kid Cudi, CyHi da Prynce and newly-signed artist Teyana Taylor who whips her black dress back and forth.

Another neat trick is when every time Big Sean says “serve” the camera abruptly pans either to the left or the right side of the frame. At the end of the clip, the Lamborghini Murcielago zips on by taking the G.O.O.D. Music family along for the ride.