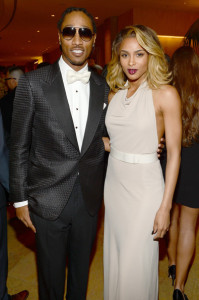 Singer Ciara is one happy woman! Her rapper beau Future (real name Nayvadius Cash) popped the question on her birthday this Sunday in New York and boy did he go all out!

Future surprised the Grammy-winner with a 15-carat diamond ring over the weekend, their publicist, Chris Chambers, told The Associated Press on Sunday night. No wedding date has been set.

The couple, who has been dating for a year, has made a string of appearances together on the red carpet in 2013, including the MTV VMAs, BET Awards, and Clive Davis’s pre-Grammy gala. In April, things between them looked serious when they debuted matching ring tattoos on that finger. Hers is an “N” (his real name is Nayvadius Cash); his is a “C” (her full name is Ciara Princess Harris).