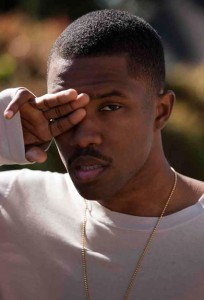 Based on sales in its first day of release on Tuesday (July 10), Frank Ocean‘s ‘Channel Orange’ is expected to sell between 110,000 and 125,000 copies this week, which could be enough to take the No. 2 position on the album chart.

HITS Daily Double estimates that Ocean’s solo debut will be one of the top sellers of the week, despite the fact that it originally wasn’t supposed to drop until July 17. Ocean announced after his appearance on ‘Late Night with Jimmy Fallon’ that the album would be released digitally a week earlier.

If ‘Channel Orange’ sells that many copies, it could rank as high as No. 2 on the charts, behind the new album by country stars the Zac Brown Band, which is likely to move at least 210k units. Past chart-toppers by Chris Brownand Justin Bieber will also be in the mix.

All this news comes in spite of Target stores refusing to sell the crooner’s critically-acclaimed album, supposedly due to its digital release. “Target has refused to carry Frank’s album because of  iTunes exclusive,” Ocean’s manager Christian Clancy said in a tweet that has since been erased. “Interesting since they also donate to non-equal rights organizations.”

Ocean has been in the news a lot in recent days after revealing he was once involved in a same-sex relationship. What Clancy is applying is that Ocean has become the subject of prejudiced for his coming out by Target officials, and that they won’t carry his album because he’s bisexual.

Clancy has since apologized for his tweet, and Target has released the following statement on the matter (via Spin):

At Target, we focus on offering our guests a wide assortment of physical CDs, so our selection of new releases is dedicated to physical CDs rather than titles that are released digitally in advance of the street date. The claims made about Target’s decision to not carry the Frank Ocean album are absolutely false. Target supports inclusivity and diversity in every aspect of our business. Our assortment decisions are based on a number of factors, including guest demand. Target has a longstanding tradition of supporting music and artistry that reflects the diverse landscape of American culture. Our history of partnering with diverse artists includes recent partnerships with a variety of musicians, such as Ricky Martin, B.o.B, and Gloria Estefan.

Either way, with or without Target’s support, Ocean is set to have a huge week with his debut album. The R&B performer and member of Odd Future also kicks off a month-long solo club tour in Seattle on Friday, leading up to a high-profile date at Lollapalooza in Chicago on Aug. 4.