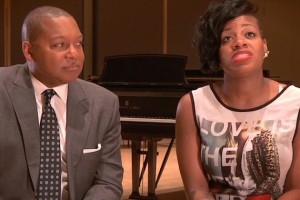 Fantasia is returning to Broadway in a new musical revue called ‘After Midnight.’ The R&B songbird will play Billie Holiday in the production, which is about jazz legend Duke Ellington’s time performing at Harlem’s famed Cotton Club.

The songstress is being mentored by Wynton Marsalis, who hand-picked her to portray the late jazz chanteuse in ‘After Midnight.’ Marsalis, a nine-time Grammy Award and Pulitzer Prize winner, co-created the musical. The ‘American Idol‘ Season 4 winner describes the music in the Broadway show as the “meat and potatas”[sic] of that era.

“You could actually live off of it to see another day,” she explains. “Whatever you were going through, that song would inspire you to feel like I could keep going. This is the meat and the potatas, this is what you need to survive.”

“The people went through a lot and it’s [reflected] in the music,” adds Marsalis.

The last time Fantasia was on Broadway, she played Celie in Oprah Winfrey’s production of ‘The Color Purple,’ which won a few theater awards.

‘After Midnight’ will preview Oct. 18 at the Brooks Atkinson Theatre in New York before its official debut on Nov. 3. Tickets are on sale now.