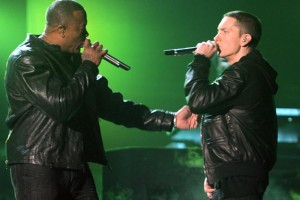 Eminem confirmed back in May that he is indeed in the studio, hard at work on his eighth platter. But the rapper just revealed that he will be working with his mentor Dr. Dre again! Em and Dre make magic when they get behind a board.

Em, who rarely does interviews nowadays, shared the news with DJ Whoo Kid on his Shade 45 radio show, according to MTV News. While the rapper is in the earliest stages of the process, with the material barely taking shape, he did shed a little light on Dre’s involvement, saying, “Yeah, of course he’ll be involved. I usually get going and kind of start going a certain direction and just record what I’m feeling. Then I’ll go see Dre and fill in some of those pieces.”

The man born Marshall Mathers also offered a few words on the death of MCA aka Beastie Boy Adam Yauch, who succumbed to cancer back in May. “It’s really sad,” Eminem said. “It’s really a shame. The Beastie Boys mean so much to hip-hop.”

So does Eminem and so does Dr. Dre.