Drake & Rihanna ‘Pour It Up’ In A Houston Strip Club 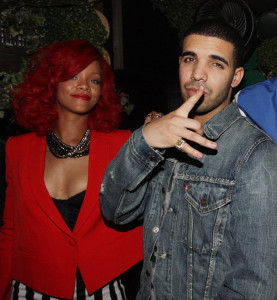 Rihanna and Drake spent a quality time together, in a strip club. The stars ended up at V Live Gentlemen’s Club in Houston on early Thursday, November 14 and splashed out around $17,000 in cash for the dancers.

It all began with Drake visiting Rihanna on her Diamonds World Tour stop in Dallas and taking her out for dinner. She then showed up at his Houston show on Wednesday night accompanied by a friend and her assistant. Later in the wee hours of Thursday, Rihanna hit the strip joint at around 2 A.M alone. Drake stepped in half an hour later and asked the security guard to move Rihanna to his section.

Jhonni Blaze, lead stripper at the club, told E! Online that she heard the guard asking Rihanna, “I bet you want to be sitting with Drake, right?” Rihanna reportedly smiled and said yes. Blaze also recalled the two looked like a couple, dressing alike and sitting close to each other.