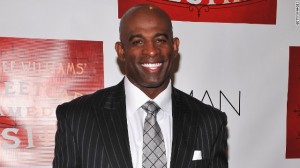 In an exclusive interview with RumorFix, NFL Hall of Famer Deion Sanders says his divorce from Pilar Sanders has nothing to do with their kids and everything to do with money.
“She’s the ultimate gold digger,” Deion says.
The NFL Network analyst is upset because his estranged wife is now asking for an annulment after 13 years of marriage, which would mean her pre-nup wouldn’t apply and she would be entitled to half of his wealth valued at $250 million.
“The judge already said this is a real prenup — so she went and got a new angle,” he claims.
Pilar tells RumorFix, “That’s funny.”
And, Deion says the model is camouflaging her quest for cash by saying she’s doing it for the kids.
Pilar says Deion took her two boys away from her in October and hasn’t returned them.
The former football and baseball player reminds us that he was granted temporary custody of the kids after a nasty fight last May, then they had joint custody and now he has temporary custody again. “She didn’t abide by the rules of custody — I have cameras at my home and I have tape of her coming and going with the kids. How could I kidnap my own kids?”
He adds, “I’m a great father. I’ve always been a great father.”
Under terms of the prenup, Pilar is due $1 million when the divorce is final plus a $100,000 “signing bonus.”