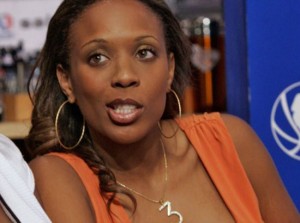 Ms. Siohvaughn Funches-Wade does a recent interview on Inside Edition. Siohvaughn talked about the good times when being married to her ex Dwayne Wade and the bad times. Siohvaugh reveals Dwanye has a violent temper and more……….

From Inside Edition, “Outside, there was a lovely playground, spacious deck, and beautiful pool. And of course, there was a full basketball court.

“This changed everything, and it changed everything for the worse,” Siohvaughn said, holding a basketball. His megawatt smile made Dwayne Wade a popular player. But off court, his marriage had spiraled into a bitter he-said-she-said “War of the Wades,” as Siohvaughn described it.

In divorce court papers, Siohvaughn claimed he had a violent temper. “He literally picked me up in the air while I was pregnant, and slammed me to the floor,” Siohvaughn said. In his book, A Father First, Dwayne Wade denied having a violent temper, and said, “I hadn’t touched her and never in a million years would I have hit her.”

In court papers, Siohvaughn also says their marriage was riddled with infidelity, claims Wade has denied. “I found text messages from at least a dozen different women, multiple women, pictures of women barely dressed and in lingerie,” Siohvaughn said. And when she confronted him, Wade’s response to Siohvaughn was, “Look at the house you live in, look at the car you drive. This is part of the lifestyle.”

“I was thinking, ‘The man I married is dead,’” Siohvaughn said.  Wade was separated, but technically still married to Siohvaughn, when he openly talked to Oprah about his relationship with actress Gabrielle Union. Oprah asked Wade, “Does Gabrielle make your eyes light up?”

“She does. She makes my eyes sparkle,” said Wade.

Once married to a man worth a staggering $65 million dollars, Siohvaughn now says she is struggling to pay bills.  “$32,762.50 past due, one bill. And there are many, many more. ”

Well, I think we all know what’s next……Reality TV