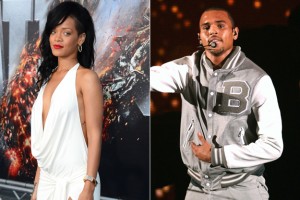 Hot on the heels of potential rehab, rumors are back about Rihanna reuniting with Chris Brown. The New York Postapparently has eyes everywhere around the controversial former couple, with spies catching them at the same nightclub as well as partying with RiRi’s family.

Sources told the newspaper that the pair are “seeing a lot of each other in private” and that their being in the same clubs at the same time twice in two weeks likely isn’t a coincidence. Further, the duo hit up the 40/40 Club, owned by Rihanna’s mentor Jay-Z, on Saturday (June 9), joined by the Bajan beauty’s fam, including her grandfather and several cousins. “Rihanna arrived first in a yellow cab, with her family and friends, and was escorted to a private room,” a spy said. “Brown arrived a little later and joined her and her family. They sat on the same couch together rooting for the Heat. There was no sign of his girlfriend.” Poor Karrueche! The duo left separately, but that wasn’t the only time they hung out this week.

The duo were spotted at the same club last night. The Post notes that while they were in separate booths, they kept a close eye on one another, with Breezy sending Rihanna two bottles of Ace of Spades champagne.

The Post reports that Rihanna’s team is torn on how to deal with her behavior, calling it “the Chris Brown issue,” whereas, in what may be either denial or a testament to her own density, Rihanna doesn’t see why it’s such a big deal. “Everyone in the business assumes she and Chris are getting back together, and it is only a matter of time before they’ll be more public about it,” the source said. “It’s like she is testing the water — first they work on music together, then they hang out in a friendly way, so the public won’t be completely shocked when they step out together publicly.”

Hova and his cohorts are less than pleased with Ri’s actions, but they recognize that the choice is hers to make. “There is also a tug of war at Roc Nation over the final say on what she is doing. But everyone agrees they can’t control Rihanna and can’t stop her seeing Chris, no matter how much they fear the negative public reaction will be,” the source admitted. “It means she probably won’t release another album this year, for fear of a backlash.”