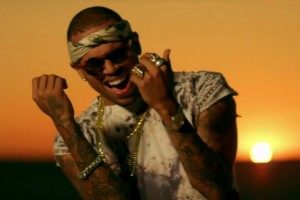 Chris Brown is chasing the girl of his dreams in his just-released video for ‘Don’t Wake Me Up.’ Directed by Colin Tilley, the clip features Brown being stuck repeating the same dream as he follows a mysterious woman into the desert.

The R&B crooner has at least three different dreams about his love interest, including one that involves him being smashed into an oblivion inside a vintage car. Elsewhere, we get to watch a thrilling dance sequence of Breezy performing behind a picturesque sunset.

At the end of the clip, Brown finally catches up with his mystery woman, played by the beautiful Araya Nicks, in a futuristic world where love is being pumped through electrodes into his head. Or is he dreaming again?

The video reminds me of ABC’s 2006 canceled series ‘Day Break‘, in which a police officer repeatedly wakes up to the same day as he tries to solve a murder case. Of course, the ending is a subtle nod to ‘The Matrix‘ (no Keanu Reeves). All and all, ‘Don’t Wake Me Up’ is good visual fun.

Watch the Chris Brown ‘Don’t Wake Me Up’ Video