CHRIS BROWN & DRAKE CREWS GET INTO BOTTLE FIGHT IN NYC 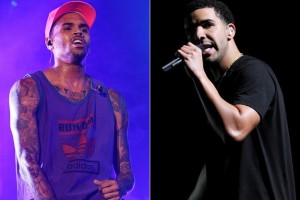 More drama has erupted between Chris Brown and Drake and this time, it got violent. It’s also likely due to Rihanna, who famously dated (and can’t seem to stay away from) Breezy and reportedly got down with Drizzy.

A bottle fight broke out at a New York City club, with Breezy sustaining a deep gash to his chin, a photo of which he tweeted. That image and the subsequent tweets have since been removed.

NYPD confirmed (via TMZ) that the crews of each singer got into a brawl at New York club WIP in the wee hours of the morning of June 14, with five people sustaining injuries as a result of the fracas. None of the injuries were critical or life-threatening. The authorities arrived on the scene after receiving a call between 4 and 5AM, so it was a late, late, late night. Neither Breezy nor Drizzy were on site when the cops arrived.

The photo of his busted, bloodied chin and some angry tweets issued by Brown have since been deleted, but  they were screenshotted by Media Takeout. Brown had tweeted, “How u party wit rich n—– that hate? Lol… Throwing bottles like girls? #shameonya!.” He tweeted that n—– were hiding behind security and in bathrooms, and that they are all weak.

Early reports indicate that Breezy and Drizzy came to blows with bottles over Rihanna. Again? These guys cannot seem to bury the hatchet over her, yet they both take to dissing her pretty frequently.