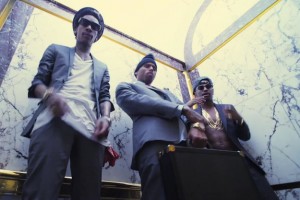 Working a 9-to-5 job can be a drag, but not if you are Chris Brown, Big Sean and Wiz Khalifa. The trio leaves their office space and party like rockstars in Brown’s self-directing new video for ‘Till I Die.’

Inspired by the classic Beastie Boys‘ video ‘(You Gotta) Fight for your Right (To Party),’ the clip begins with comedian Jamie Kennedy as a mail boy who gets tripped up by Brown, the office prankster. Breezy is not ready for corporate America as he’s dressed in a JC Penny suit wearing gold chains, a beanie hat and gold fronts.

Brown then meets up with Sean and Wiz as they leave work and hitch a ride with the local Rasta man Snoop Dogg who is accompanied by three hotties in a vintage Pontiac convertible. Together, the gang cruise the streets of Los Angeles and make a stop at a house party where more debauchery ensues.

You gotta fight for your right to party!