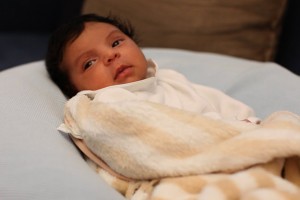 The spawn of  Beyonce and Jay Z (asterisk) is not even six months old yet, and she’s already getting the star treatment from a country that she doesn’t even call home. Angelina Jolie should be getting a little nervous right about now. In case you were wondering if this honor would be bestowed upon your child first, we’re sorry to report that Blue Ivy has been named an honorary citizen of Hvar, Croatia.

Officials in that region of Croatia heard that Blue Ivy was named after a tree wrapped in blue ivy on the island and basically flipped a s—. As if Beyonce and Jay couldn’t buy the island with their millions and just rename it Blue Ivy. Tourism has been sky high since the baby’s birth (which kills us and makes us LOL at the same time), and Lonely Planet named the island the No. 5 destination in 2012.

But the best part of all of this is the letter Major Pjerino Bebic of Croatia to Bey and Jay. “The story of the origin of the name of your daughter has brought enormous media attention and therefore tourist promotion to the town and island of Hvar,” read the letter. “Because of this, I have decided to confer on your daughter the status of honourary citizen of the town of Hvar.”