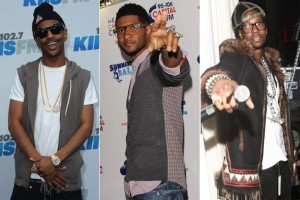 Chart-topping artists Big Sean, Usher and 2 Chainz have been tapped to perform at the BET Awards 2012 this summer. The event will be held at the Shrine Auditorium on July 1 in Los Angeles. The trio join previous announced performers Nicki Minaj and Chris Brown.

This will be Big Sean’s second time performing at the BET Awards following his 2011 performance of ‘My Last’ with Brown. Meanwhile, Usher will return to the BET stage for the first time since 2010 where he serenaded the crowd with his love ballad ‘There Goes My Baby.’

For 2 Chainz, this will be his first time ever at the BET Awards. We hope that the Atlanta rapper will join Minaj for a duet of ‘Beez in the Trap’ (*fingers crossed*).

In addition, funnymen Kevin Hart and Cedric the Entertainer will present trophies, while Hollywood heavyweight Samuel L. Jackson will host the ceremony.

The BET Awards will air live July 1st at 8PM ET on BET and Centric.