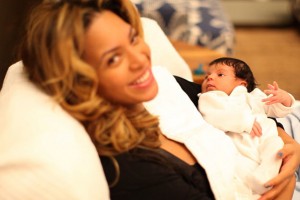 Since the birth of  Beyonce and Jay-Z‘s baby Blue Ivy Carter, many have speculated on their daughter’s unique name. The R&B queen posted a poem today (June 14) by Rebecca Solnit called ‘A Field Guide to Getting Lost’ that offers a little insight on why her newborn is named Blue Ivy.

“The world is blue at its edges and in its depths. This blue is the light that got lost. Light at the end blue end of the spectrum does not travel the whole distance from the sun to us. It disperses among the molecules of the air, it scatters in the water. Water is colorless, shallow water appears to be the color of whatever lies underneath it, but deep water is full of this scattered light, the purer the water the deeper the blue.

The sky is blue for the same reason, but the blue at the horizon, the blue of the land that seems to be dissolving into the sky, is a deeper, dreamier, melancholy blue, the blue at the farthest reaches of the places where you see for miles, the blue of distance. This light does not touch us, does not travel the whole distance, the light that gets lost, gives us the beauty of the world, so much of which is in the color blue.”

After reading the poem, we guess that Beyonce is telling her readers that the color blue, like the ocean and the sky, is forever and that her love for Blue Ivy will also be forever.

Blue, of course, is Jay-Z’s favorite color, while Ivy, reportedly, is in reference to the Roman numeral IV (“4″), which is the couple’s favorite number. The digit is significant for them since Beyonce’s birthday is Sept. 4 and Jay-Z’s birthday is on Dec. 4. They were also married on April 4, 2008, and they celebrated their 4-year anniversary this year.

Since debuting her new picture-themed Tumblr in April (four, again!), Beyonce has been on a blogging tear. She has written elegiac tributes to late pop icons Whitney Houston and Robin Gibb and a heartfelt letter to First LadyMichelle Obama.