Who run the world? Girls!

Beyonce wasn’t kidding when she sang those words on her debut single from last year’s ’4.’ The singer and Blue Ivy‘s mom wrote another letter to First Lady Michelle Obama to thank her for all she does for our country and to show her support for President Barack Obama as he embarks on his bid for re-election.

Bey’s certainly quite an A-lister and the Obamas are lucky to have her in the corner while they fight the good fight to return to the highest office in the country. 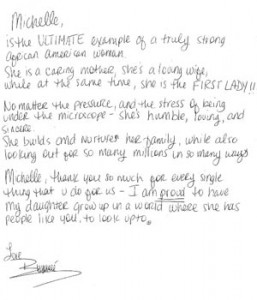 What’s so special about Bey’s open letter to Michelle O., which she had posted on her blog, is that she chose a genuine and sincere way to show thanks. Rather than bash the GOP candidates or simply show up passively at a fundraiser, Bey actively wrote the letter and filmed the spot below, where she reads her heartfelt words.

“I wrote a letter to the First Lady because I wanted her to know I am grateful for everything she is doing for our country, and also for women around the world,” Bey, rocking thick spiral curls, said. The Queen B read her words aloud, while footage of Mrs. Obama doing her First Lady duties is displayed onscreen. It’s an effective strategy to pair Bey’s words with Michelle’s actions.

Bey says the First Lady has inspired her to live a healthy lifestyle –remember they worked together on the ‘Move Your Body‘ fitness video, which aimed to get kids to exercise and to help stamp out childhood obesity — as well as inspiring her to further support veterans.

In her letter below, Bey writes: “Michelle Obama is the ultimate example of a truly strong African-American woman.”

The feeling is mutual, as Michelle took the First Daughters to one of Beyonce’s May gig at Revel in Atlantic City.