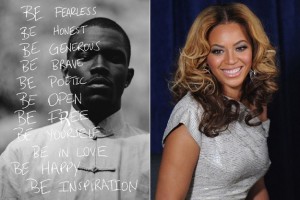 After Frank Ocean took to Tumblr last week to publicly announce he was bisexual, luminaries like Jay-Z were quick to vocally support him. And now he can count another superstar as an ally:  Beyonce.

On her website, Beyonce posted a photo of Ocean along with a handwritten poem superimposed on top. The touching tribute read:

Ever since he came out a few days ago, Ocean, who’s written and performed with scores of pop and R&B stars (most notably on ‘No Church in the Wild’ alongside Kanye West and Jay-Z) has gotten a lot of support — and probably a lot of haters too, but ignorance like that is best ignored.

He broke the news by publishing a lengthy letter on his website, writing about a friend he felt more than just friendly feelings for. “[Four] summers ago, I met somebody. I was 19 years old. He was too. We spent that summer, and the summer after, together. Everyday almost,” Ocean wrote. “By the time I realized I was in love, it was malignant. It was hopeless. There was no escaping.”