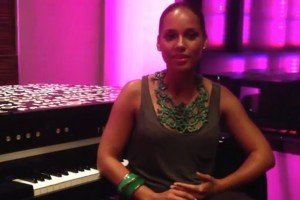 It’s been three years since we heard any new material from Alicia Keys. Since her hiatus, the R&B songbird became a new mom to three-year-old Egypt and is enjoying the married life with hubby Swizz Beatz. Now she’s ready to make her return to music.

Keys released a new video via her Twitter account to give fans an update on her follow-up album to her 2009 effort ‘The Element of Freedom.’ In the six-minute clip, the Grammy-winning singer sits at a piano and discusses her eight-month musical journey crafting songs for the project.

“I feel so crazy excited,” she says about the album, which has no title as of yet. “It’s like I’m a different person. Everything is new. From being married and having a baby and what’s that done for me. It’s giving me a sense of real stability. A real connection, grounding, reason [and] purpose.”

Since Keys is so anxious to release new music, she has been adding a hashtag to her tweets “#AKNewDay,” which could be a hint that her new album or single will be called ‘New Day.’

Beyond excited for tomorrow… I have a surprise for you!!! It’s gonna be a #AKNewDay 😉