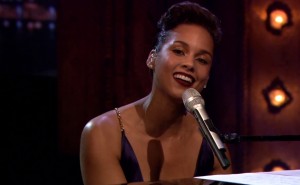 Alicia Keys is famous for her soaring ballads, and her performance on ‘Late Night With Jimmy Fallon’ was no different. The singer sat at her piano and belted one out, but it wasn’t anything from her upcoming album.

Instead, Keys crooned a song that was at once motivational, moving and really familiar — though viewers and fans may not have really recognized it until she got to the chorus. Keys was singing the ‘Gummi Bears’ theme song from the 1985 to 1991 run of the Disney cartoon! ‘The Adventures of the Gummi Bears’ was about, well, bears who gained special, high-jumping powers from drinking gummiberry juice.