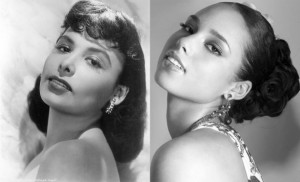 Rumblings of Alicia Keys possibly playing legendary entertainer Lena Horne in a biopic began circulating back in 2007, when Oprah Winfrey had taken over the languishing project that previously had Janet Jackson attached as the lead.
There were reports that Jackson’s 2004 Super Bowl scandal got her dropped from consideration by Horne herself, clearing a path for Winfrey’s choice of Keys with a script from “Oprah Winfrey Presents…” screenwriter Lloyd Kramer. But, that project, too, has stalled.
Horne would never get the chance to see her life story on the big screen. The singer, actress, civil rights activist and dancer died in May 2010 at the age of 92.
“Lena the woman, the human being – that is the most fascinating to me: her vulnerabilities, her life, her flow through the many difficult times (and good ones) and her ability to remain graceful, elegant and beautiful always,” Keys said of her at the time.