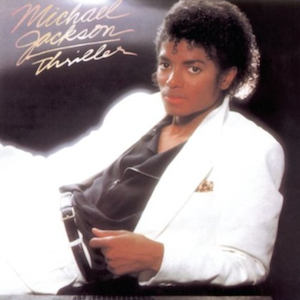 Although there’s been much ado about Michael Jackson‘s influential ‘Bad’ album, nothing eclipses the unparalleled achievements of its predecessor ‘Thriller.’ 30 years ago, Michael’s sixth album conquered the music world both with its astonishing sales records and musical impact.

‘Thriller’ is, undoubtedly, the greatest pop album in history and currently holds the distinction of being the best-selling album of all time, with 110 million copies sold worldwide.

Released on Nov. 30, 1982, the album, produced by studio maestro Quincy Jones, held the No. 1 spot on the Billboard 200 chart for 37 weeks in 1983 and garnered seven top 10 singles, including ‘P.Y.T. (Pretty Young Thing),’ ‘Wanna Be Startin’ Something,’ ‘Human Nature,’ ‘Beat It’ and of course, the title track. The collection was also honored with 12 Grammy awards, eight for Michael himself and four for Jones.

MJ and Jones first collaborated on his fifth album ‘Off the Wall,’ which garnered four top 10 hits including the title track and sold millions of copies. However, Jackson wasn’t happy with the album and felt he could do better.

“Ever since I was a little boy, I would study composition,” he told Ebony magazine in 2007. “And it was Tchaikovsky that influenced me the most. If you take an album like Nutcracker Suite, every song is a killer, every one. So I said to myself, ‘Why can’t there be a pop album where every [song is a killer]?’”

That statement pretty much sums up ‘Thriller’ — it was a killer album. The songs were well-crafted thanks to his songwriting team: Rod Temperton (who penned ‘Thriller’), James Ingram (‘P.Y.T.’), and Steve Pocaro and John Bettis (‘Human Nature’). Production-wise, Jones masterfully created music that was far-reaching than just R&B and soul music.

“I picked one of the most incredible teams in the world, the guys that I worked with… it was a divine situation,” Jones recalled to Entertainment Weekly in 2009. “Everybody had this incredible respect and love and affection for each other.”

“We ended up making ‘Thriller’ in eight weeks, the entire album,” he continued. “We didn’t have time to think about all that intellectual stuff. Music is a strange element of the planet, really. You can’t see it, taste it, touch it, smell it — but you sure can feel it.”

‘Thriller’ is a flawless album because it had something that everyone could enjoy. ‘The Girl Is Mine’ was a sweet ballad that girls would love, while ‘Billie Jean’ and ‘P.Y.T.’ catered to the dance floor. ‘Beat It,’ with Eddie Van Halen‘s charging guitars, could easily appeal to rock heads and ‘Human Nature’ touched the human spirit. It was hard for anyone to not like this album.

However, Michael did endure some obstacles with his musical masterpiece. Despite the overwhelming success of the album, MTV, at the time, refused to air any of Michael’s videos, particularly ‘Beat It’ and ‘Billie Jean,’ because of their “strict format of playing rock videos” (hmmm).

According to urban legend, CBS Records boss Walter Yetnikoff threatened to pull every artist’s video from his label if MTV didn’t play ‘Billie Jean.’ Eventually, MTV relinquished and premiered ‘Billie Jean,’ which is widely recognized as the video that broke racial barriers for black artists on the channel. The video for ‘Beat It’ followed and the response was so overwhelming that it boosted album sales to 800,000 copies per week.

Costing over $150,000 to produce, the ‘Beat It’ video was Michael’s urban version of ‘West Side Story.’ Directed by Bob Giraldi, the clip features an exciting ensemble dance piece choreographed by the late Michael Peters. Dressed in his iconic red zippered jacket, Michael snapped his fingers and displayed mesmerizing footwork along with hundreds of extras, which also included members of a Los Angeles-area gang.

Michael Jackson’s ascension into pop stardom was nothing short of amazing. So how does Michael top that? He creates one of the most popular videos of all time with ‘Thriller.’

The 13-minute horror short film, which cost around $500,000 to produced, holds the Guinness Book of World Records title of being the most successful music video of all time. “Michael was terrific to work with,” said veteran filmmaker John Landis who directed the iconic clip. “He was in his mid-twenties, but he was like a gifted 10-year-old. He was emotionally damaged but so sweet and so talented.” 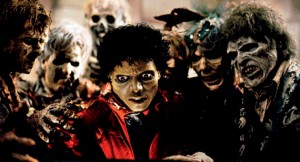 In the video, Michael played a young man who goes on a movie date with his beautiful girlfriend (played by Playboy playmate Ola Ray). Afterward, the two share a moonlit walk on a cavernous street and things start to go awry. Michael, who in an earlier scene montage turned into a werewolf, now transforms himself into a stylistic zombie and choreographs the undead in a thrilling dance performance. The success of ‘Thriller,’ both the album and video, earned Michael the well-deserved title of the “King of Pop.”

Sadly, Michael died on June 25, 2009 after apparently suffering from cardiac arrest at his rented mansion in Los Angeles. The late pop icon left this world way too soon and left a big void in pop music.

“I always want to do music that influences and inspires each generation,” Michael said in a 2007 Ebony interview. “Let’s face it, who wants mortality? You want what you create to live, and I give my all in my work because I want it to live.”

Michael Jackson may be gone, but his musical legacy will continue to live forever.