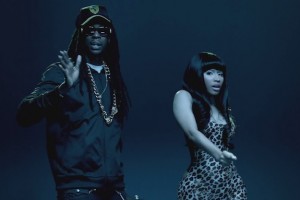 If you think 2 Chainz is everywhere now, just wait until the summer. The Atlanta rapper is gearing up to open for Nicki Minaj on her Pink Friday tour, according to MTV News. The North American trek starts July 16 in Chicago and ends on Aug. 12 in Vancouver.

The pair first teamed up on Minaj’s single ‘Beez in the Trap’ earlier this year and they have been cool ever since. The two are scheduled to perform at the upcoming BET Awards, which airs live from Los Angeles at 8PM ET on July 1.

As for the Pink Friday tour, Minaj’s creative director and choreographer Lauriann Gibson promises that fans won’t be disappointed by what the Harajuku Barbie is bringing to the stage. “I love [what] I heard [on] ‘Roman Reloaded.’ I loved her delivery. I love the way she flows,” she says. “So the Pink Friday Tour is really good and it’s kind of like a glimpse back to what a real rap show is. It’s intimate but big at the same time.”

Meanwhile, 2 Chainz is preparing for a big summer himself. The in-demand rhyme-spitter is set to release his debut solo album ‘Based on a T.R.U. Story’ on Aug. 14. He also just released the black-and-white visual for ‘No Lie‘ featuring Drake. You can also check out 2 Chainz in Fader magazine’s ‘Summer Music‘ Issue.