2 CHAINZ TAKES THE COVER OF FADER 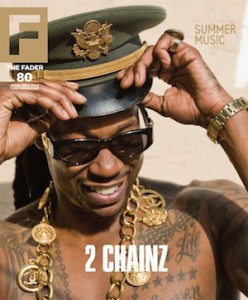 If the rap game was the NBA Finals, 2 Chainz would be a shoo-in for the MVP Award. Although new fans might look at the Atlanta rapper as a rookie, he actually has been in the rap game for the past 13 years.

Now 2 Chainz nabs his first-ever cover with Fader magazine’s “Summer Music” issue. Looking like a pilot on the cover, it’s easy to see that 2 Chainz is navigating his career and he’s in full control.

2 Chainz, formerly known as Tity Boi, garnered early chart-topping success in 2007 as one-half of Playaz Circle with ‘Duffle Bag Boy.’ But setbacks and internal conflicts prevented him from reaching bigger success. Five years later, the  rapper has resurrected his career under a new rap alias and is featured on nearly every hit song that’s been released in 2012.

In the cover story, he opens up about his successes and failures in his storied rap career. He talks about the origins of his rap name 2 Chainz (a turn of phrase for “2 change”), his new solo deal with Def Jam, and how he’s adjusting to his newfound fame.

2 Chainz also reflects on the lukewarm response Playaz Circle received and how he dealt with it. “People said [Playaz Circle] didn’t do good numbers-wise but I’m confident in the material even up to this day,” he tells the magazine. “A lot of rappers who maybe didn’t [sell] well damn near committed suicide but I always thought there was something wrong with everybody else. They didn’t get it.”

Now that 2 Chainz (real name Tauheed Epps) has received a second chance at rap stardom, he hasn’t forgotten about the people who left him hanging back in the days when he wasn’t so hot. “A lot of people didn’t see my vision, didn’t rock with me. They walked past me and didn’t speak, but I’d be like a female if I held grudges,” he says. “My revenge is them asking me to do a song. I charge the dog s— out of them.”