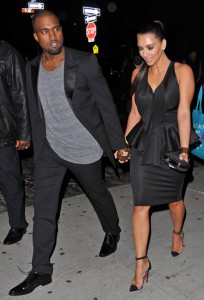 As Kim Kardashian’s due date is getting closer, more rumors ahead surrounding her baby with Kanye West swirl on the web. It’s reported that the rapper wants to call his first child North West while the reality TV star is preparing a monochrome nursery for the bundle of joy.

“Kanye’s ego is something else, so he’s quite serious about the title,” a source tells The Sun. “He also has a sense of humor though and knows how his self-indulgence is seen by the general public. It’s half tongue-in-cheek, half what Kanye probably feels is true.”

A different source opens up to PEOPLE about Kim’s black and white nursery plan. “Kim was gushing about her nursery plans while carefully selecting gifts for her baby registry with sisters Khloe and Kourtney at Bel Bambini in West Hollywood,” the source claims. “She mainly looked at simple clothing, nothing too girly.”

Kim is due to give birth in early July. The mom-to-be sparked a pregnancy scare earlier this month after being rushed to hospital following a couple of trips overseas with her baby daddy. She quickly assured she was fine and has been out and about ever since.