WATCH EMINEM & NAS FREESTYLES FROM ICE-T’S NEW DOCUMENTARY ’SOMETHING FROM NOTHING: THE ART OF RAP’ 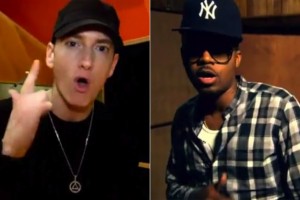 A rapper’s biggest asset is his or her ability to spit a freestyle off the dome. Many have tried but there are few lyricists who are gifted in the art of freestyling like Eminem and Nas. In Ice-T’s upcoming documentary ‘Something From Nothing: The Art of Rap,’ Slim Shady and Escobar shows how well-versed they are when it comes to spitting a freestyle.

Eminem is the most ferocious with his bars rapping maniacal rhymes about his past drug use. He spits:
“At the Ozzfest with Nas / Bumping Das EFX / In a wrecked up Datsun / And dropped two X’s and straight Vicodin out of my pocket / They cost less / I’m a hot mess / ‘Cause I tripped and I got my head stuck in a wasp’s nest / In the process / Awesome!”

Meanwhile, in Nas’ freestyle, the New York emcee gives Teflon love to the hustlers who stand by the code of the streets. He raps: “Real friends we have a code of ethics / No question / No feminine tendencies / We are not expectin’ no gossip / No phony logic / No countin’ your homie pocket / Spare no expense for legal defense if your homie locked up / Who cares who was the last who looked out.”

Ice-T’s documentary ‘Something From Nothing: The Art of Rap’ documents the art of lyricism as told by veteran rhyme-slingers Kanye West, Ice Cube, DMC, Snoop Dogg, Mos Def, Common, Dr. Dre, Q-Tip and many more. The film will open in theaters on June 15.