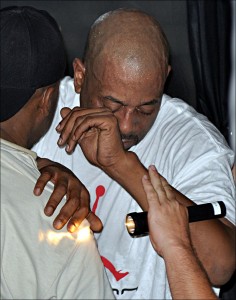 Several emergency personnel rushed into action, kneeling over Loc’s body to treat him. Fans were asked to leave while the 47-year-old rapper received the treatment. Despite the health scare, the father of two sons refused to be taken to hospital.

Loc’s rep did not give any comment regarding the incident.

Tone Loc made his debut in the music industry in the late 1980s. In 1990, he received two Grammy nominations for Best New Artist and Best Rap Solo Performance. Besides rapping, he also acts, starring in more than a dozen movies, including “Ace Ventura: Pet Detective” and “Heat”.