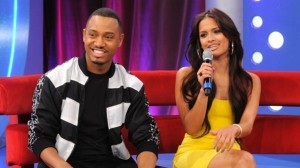 After years of hosting “106 & Park,” Terrence J and Rocsi are moving on.

Terrence J and Rocsi, the longstanding hosts of  BET’s “106 & Park,” have announced that they will be leaving the show.

The duo announced their departure on Tuesday (May 29) during the show.

“The first day I cracked the mic on 106, I was staying on a cot in a basement,” said Terrence.

Rocsi continued, “Until the moment we leave, we pledge to bring you young Black culture. It continues to be our honor to do this for you.”

Today, after seven exciting years, 106 & Park hosts Terrence J and Rocsi announced that they will be leaving the show. It is no secret that there are a number of opportunities coming their way and we’re fortunate that they’ve been with 106 & Park for so long. They will be staying on the show for a while, so that we can have a “victory lap” — a celebration of their years at the helm of 106 & Park — before their departure. Terrence J and Rocsi are destined for great success and we at BET Networks will always take pride in being their original home — and be a place where I hope they’ll always feel welcome.

“We are humbled at the opportunity to be a part of your lives,” added Terrence during the show, assuring fans that “we have a huge farewell show coming for you guys. We’re going to be leaving with a bang.”