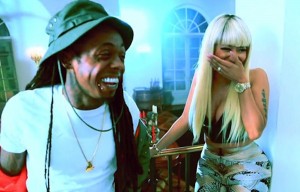 Nicki Minaj hypes up the upcoming premiere of her new music video by giving away a short clip ahead of the full release. The female rapper parades her curvaceous figure in a neon green crisscross one-piece bikini and some figure-hugging dress. She also flirts with her former mentor Lil Wayne and gives him a kiss.

The Young Money first lady will sit down with MTV on April 2 to talk about the track off her album “Pink Friday: Roman Reloaded – The Re-Up ” and fully premiere the video. Fans are invited to take part in the Q&A session by submitting their questions for the interview via Twitter using the hashtag #AskNicki.

After filming the video, Weezy allegedly had seizures that sent him to stay at the Cedar-Sinai Medical Center for a few days. He later addressed his health scares, squashing rumors that the seizures happened due to drugs. He said he was an epileptic and noted that he suffered “plain stress, no rest, overworking.”