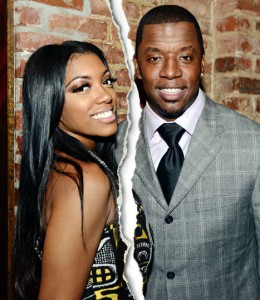 Not only was she not “with him shooting in the gym” (or in his case, throwing on the football field), but they didn’t get married until he was retired. She wants that money tho!

Porsha Williams has responded to Kordell Stewart’s divorce filing. “The Real Housewives of Atlanta” star submitted her own divorce papers, seeking alimony from her estranged husband and asking him to give her the exclusive use of their mansion in Atlanta.

Kordell previously asks judge to block his estrange wife from getting spousal support, reasoning “[She’s] an able-bodied person, earning income and is capable of supporting herself.” He also states there are no marital assets subject to division, hinting they have a prenuptial agreement.

However, Porsha through her attorney Randall Kessler contends that she suffered setback in her career because she had to give up her job for two years while they were married in order to be the mother of his child from a previous relationship and the wife that he needed.

She also notes in her response paper that her “actual name” is Stewart, Kordell’s last name which she took after they got married and she used on her reality TV series, but the former athlete “improperly” identified her by her maiden name, Porsha Williams, in his divorce documents.

The former NFL player, who went by the nickname “Slash” during his playing days, has a son named Syre with his ex Tania Richardson. He married Porsha in May 2011 and has no kid with her. Early in 2012, Porsha suffered a miscarriage due to uterine fibroids.

Kordell filed for divorce on March 22 claiming that their marriage was “irretrievably broken.” His lawyer said it was a “very difficult decision” for him. He was reportedly being too controlling of his wife. On the Bravo show, he basically gave ultimatum to Porsha to choose between work and being a mom.

When asked about the matter, she said, “Well I don’t have a problem with a man having an opinion. If you’re a man, I need to know where you are leading our family. And I love that about him and along the way, there are some things I agree with and some things I don’t. As long as he can respect my opinion and let me woo him into what I want.”

She also came to his defense when once asked to comment about gay rumors surrounding him, “I don’t know any details of all that. There’s lies out there on the Internet about all kinds of celebrities. One thing I do [know] is my husband loves me, and he puts it down and I will be with him forever. He’s more man to me than I have ever met.”

Porsha was blindsided by Kordell’s divorce filing. She “held off on filing for a divorce herself and remained committed to the marriage because Mr. Stewart promised to work on the marriage with her.” A source told E! News, she fought for their marriage and “put up with everything Kordell did because of [his son] Syre.”

“She has stayed in that marriage and in that home for all this time because there was a child involved. She loves Syre like he is her own. She was with Syre all the time, and he even calls her ‘Mom’,” the insider claimed. “She couldn’t leave before, she just couldn’t do that to him.”

One day before filing for divorce, Kordell was seen with another woman at Dave & Busters video game arcade restaurant in Marietta, Georgia. According to TMZ, his rep initially said he was with his son’s mother Tania, but when she was contacted by TMZ, she denied the woman was her. Calls back to Kordell’s camp haven’t been returned. Young Syre was spotted at the diner as well.

Meanwhile, Porsha is turning to fellow “Real Housewives” cast NeNe Leakes to help her deal with the situation. “NeNe has been a fabulous friend to Porsha,” the source explained. “She has given her a shoulder to cry on. The two of them may be going out this weekend.”

Although the divorce battle has been set in motion, neither Porsha and Kordell moves out of the house they share. It’s a big house, “so they actually don’t need to spend time together while they are both there. She has been trying to keep things consistent. This has been a big adjustment period,” the source said.