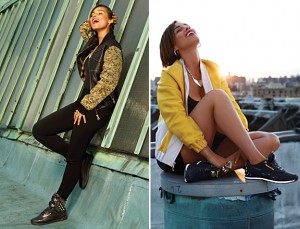 Who knew Reebok could make such a comeback. Alicia Keys debuted her new Reebok shoe collection in LA’s Nordstorm store where her collection supposedly sold out in 30 minutes. Her and hubby Swizz Beatz were all smiles as they continued to promote the new line of sneakers. Alicia Keys is, without a doubt, following in her husband’s footsteps. Swizz is now the creative director of Reebok and recently released his own sneaker. Two years later, he put his wife on to the game.