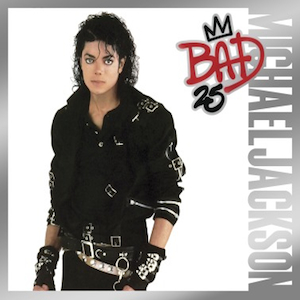 Michael Jackson‘s 1987 album ‘Bad’ will be re-released as a three-CD, one DVD deluxe set called ‘Bad 25′ in honor of the album’s 25th anniversary. This unique collector’s item boasts a bountiful of goodies that should satisfy the biggest Jackson fan.

The collector’s set will feature a CD of the remastered original album; a disc of previously unreleased song demos from the ‘Bad’ recording sessions; several DJ remixes (by Skrillex and Diplo) and a concert CD and DVD of MJ’s personal recording of his Wembley Stadium show in London during the ‘Bad’ tour. The massive box set will also include two extensive booklets with unreleased photos from the recording sessions, video sets and the concert tour and more.

On June 5, Epic/Legacy will release the original album’s first single, ‘I Just Can’t Stop Loving You,’ exclusively to all Wal-Mart stores. In addition, the CD single features an unreleased ‘Bad’ session track called ‘Don’t Be Messin’ ‘Round’ (Demo).

Fans can cop an array of ‘Bad 25′ anniversary merchandise, including ‘Bad’ World Tour jackets, at michaeljackson.com. If you are a true Michael Jackson devotee, this is one ‘Bad’ collection you can’t live without. Shamone!

The ‘Bad 25′ anniversary deluxe edition will arrive in stores on Sept. 18.