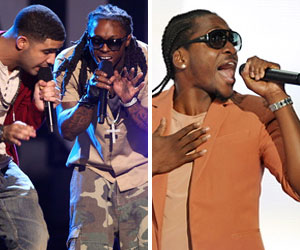 Following a couple days of controversy, beginning with Pusha T’s “Exodus 23:1” track, which many believe is aimed at Drake, Lil Wayne has decided to fire back … on wax.

Hours after the G.O.O.D. Music signee intially released the song, the Internet went crazy. Although he doesn’t name anyone on the track, fans and critics speculated on who he is referring to. So did Lil Wayne.

He responded quickly, via Twitter,  saying directly: “Fuk pusha t and anybody that love em.” (click HERE for the previous story)

Kid Cudi would eventually respond in a tweet of his own, in defense of his labelmate, making it clear he has his back. “I love my n**** Pusha T, f*** anybody who feel different. We ain’t ho’s out here.”

Weezy responded on Friday (May 25) with a short Swizz Beatz-produced freestyle, titled “Goulish.”