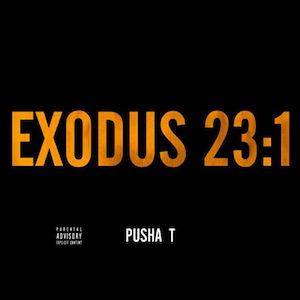 On the haunting track, Pusha T makes reference to him being signed to Lil Wayne who is signed to Cash Money whose label is being distributed by Universal Music group.

Pusha T also threw a shot at producer Young Chop who had an issue with Kanye West flipping his beat for Chief Keef’s remix ‘I Don’t Like’ (featuring Pusha, Jadakiss and Big Sean). “You can keep your beats, n—a / We’d much rather share your b—-, n—a, b—- n—a,” he raps.

It didn’t take long for Weezy to respond to Pusha T’s ‘Exodus’ track. The Young Money honcho quickly defended Drake on his Twitter page with this angry tweet:

Fuk pusha t and anybody that love em

This isn’t the first time that a G.O.O.D. Music artist has taken a shot at the Young Money superstar. Common and Drake were embroiled in a brief battle last year that was later resolved. Drizzy hasn’t responded to Pusha T’s alleged diss towards him. Stay tuned as this beef continues to heat up.