Kanye West‘s original song ‘Theraflu‘ has gone through a couple of changes since its release. After the makers of the cold medicine had an issue with the title and its NSFW artwork, it was then changed to ‘Way Too Cold.’ Now, West has changed the song title again to ‘Cold’ and revealed the single’s new cover art.

Designed by artist George Condo, who did the album artwork for West’s ‘My Beautiful Dark Twisted Fantasy,’ the updated cover features a topless woman and what looks like a bugged-out creature standing behind her. Does this picture represent him and his current boo Kim Kardashian? Who knows? 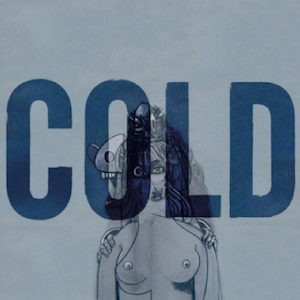 We are not sure if ‘Cold’ is the lead single from West’s G.O.O.D. Music compilation album ‘Cruel Summer.’ The other track ‘Mercy‘ (featuring Pusha T, 2 Chainz, Jadakiss and Big Sean) had a better response from fans and critics alike, so we don’t know what to expect from Yeezy’s camp.

Meanwhile, West has teamed up with Nike to release the Nike Air Yeezy II, which are the follow-up to his popular 2009 Air Yeezy sneakers. The newer versions come in two colors — platinum and black — and boasts Nike’s breakthrough technology and design.

Both the Air Yeezy II kicks boast anaconda-textured leather panels with reptilian-inspired spikes on the back. In addition, the kicks features a mesh upper, a nubuck lining, fluorescent bottom and a loop strap with hieroglyphics that spell out “YZY” (aka Yeezy).

The Air Yeezy II’s were specifically designed to West’s specifications and redesigned to allow greater movement in the shoe than his original version. The sneakers will be available at Nike retailers worldwide in limited numbers on June 9, a day after West’s 35th birthday. 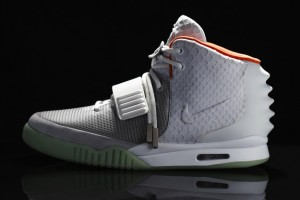