JAPANESE CHEF COOKS HIS OWN PENIS AND SERVES IT TO GUESTS 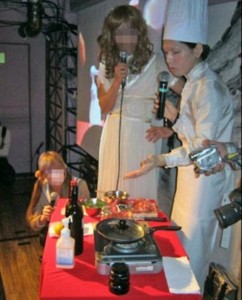 Mao Sugiyama, a 22-year old Japanese asexual, had his genitalia removed in April a few weeks after his 22nd birthday.  Mao, who had no use for his twig and berries, didn’t just want to throw his penis away. Oh no.  He thought about eating it himself, but then realized that was selfish.  So, Mao decided to sell the opportunity of eating his penis to the highest bidder.

But where could Mao possibly find someone that would want to eat his penis?  Hmmm. The internet!

Mao took to Twitter and began advertising the chance to eat his junk.  He tweeted,”‘I am offering my male genitals (full penis, testes, scrotum) as a meal for 100,000 yen. I’m Japanese.”  Since the response was so overwhelming, Mao decided to split the ‘meal’ between six guests.  Each guest paid about $250 U.S. dollars to gobble Mao’s knob.

Mao made a guarantee that he was free of any venereal diseases, and he did not receive any female hormonal treatment before his surgery.  This was 100% male dong they’d be feasting on.  He garnished his manhood with mushrooms and parsley, and nearly 70 guests attended the event.  Of the 70 guests, six of them enjoyed the main course.

We know what you’re thinking.  What did it taste like?  Well, guests said that it was ‘very rubbery and didn’t really taste like anything.’