DRAKE GETS ‘STYLED ON’ BY BILLIONAIRE TYCOON T. BOONE PICKENS 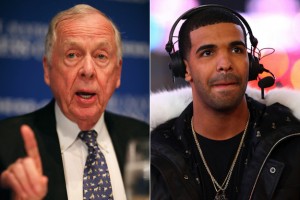 In a moment of humility and hilarity, Drake gets ethered on Twitter by a Texan billionaire who has made a lot of money in his lifetime. On May 30, ‘The Motto’ rapper decided to post a reflective tweet about his life as a rich artist. “The first million is the hardest,” he wrote.

While that was nice for his followers to know, not everyone was impressed with Drake’s tweet. Oil tycoon T. Boone Pickens, who apparently follows the rap superstar on Twitter, responded with his slap-in-the-face tweet, “The first billion is a helluva lot harder.” Touché, Mr. Pickens!

An ego-bruised Drizzy took Pickens’ sagely response in stride and humbly tweeted back, “@boonepickens just stunted on me heavy.” He sure did.

Twitter chatter aside, I’m wondering why is Mr. Pickens following Drake on Twitter? Is he a die-hard rap fan? Does he listen to Lil Wayne when he’s being chauffeured around in his Rolls-Royce? Is Birdman his accountant? I kid, I kid.

Now that Drake and Pickens are BFFs on Twitter, maybe they can share some financial tips together. Lord knows Drake could use some legal advice to avoid those costly lawsuits. HYFR!

Check out Drake and Pickens conversation below:

The first million is the hardest.

The first billion is a helluva lot harder RT @Drake: The first million is the hardest.

@boonepickens just stunted on me heavy.