Francesca Eastwood is Clint Eastwood’s daughter and one of the stars of ‘Mrs. Eastwood and Company,’ a reality show which features Eastwood’s second wife Dina and members of their blended family.

In an apparent bid for a higher level of reality TV fame, Francesca, along with her boyfriend photographer Tyler Shields, pulled quite a stunt over the weekend. Using a chainsaw and “$4 worth” of gasoline they cut up and then incinerated a Birken handbag, which retails for $100,000, and posted photos of the carnage on Shield’s website.

“Destruction is a beautiful version of freedom… Would you want this bag? Are you sad to see me destroy it?,” Shields wondered.

But it seems that it’s Franseca who is getting the most flack for the destruction. Twitter and Facebook have been lit up with comments condemning the 19-year old, the gist of them being “how can you destroy something so valuable at a time so many people are struggling financially.” (Usually expressed with more colorful language.)

Franseca has also been getting death threats over social media, and is said to be baffled that so many people don’t understand “art.”

Putting aside any debate about the appropriateness of the stunt — and the eternal question of “what is art” — we just want to know what in the world has happened to Clint Eastwood that he now allows his family to parade around like a bunch of publicity-hogging Kardashians. More pictures from the Birken-killing photo shoot are below. 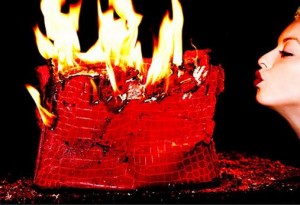