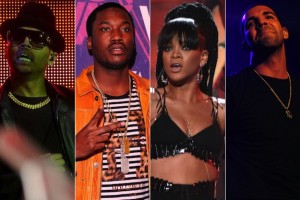 Another day, another Twitter beef. This time it’s a three-way dis-a-thon between Chris Brown, Meek Mill and Drake. All of this is bewildering and unnecessary so bare with us as we tried to sort the tweets out.

Apparently, over the Memorial Day weekend, Meek Mill, who is rumored to be smashing Rihanna, tweeted “U took me off ya song cause she let me watch da throne,” and then deleted it from his timeline. We are assuming that Brown heard that Mill was romancing the Barbadian songbird and decided to remove the Philly rapper’s guest verse on a new song called ‘Don’t Judge Me.’

Breezy then responded with this tweet, “She’s a dream chaser! There are alot of dreamers so she’ll be running forever.” Mill then sends a slew of tweets in response that seems to be dissing Rihanna. “These h–s b acting up….and these n—s b letting em!” he wrote in one message. He then adds, “I treat that bad b—- like a bad check cause I cash that and I bounce! I’m so sophisticated!”

Then Drake jumps into the conversation and fires off a few subliminal tweets of his own. Although Drizzy was spotted getting slizzard with Rihanna in Miami, it looks like he threw RiRi under the bus, as well. “Oh that’s your ho? That’s our ho too. Lol,” he tweeted, adding, “We get gyal eeeeaasy.”

So what does Rihanna have to say about this? Unlike the three men, she summed up her response in an interesting photo. Rihanna posted a picture of herself flipping the bird with a gun ring on her middle finger. “F— what you think,” read the caption on the pic.

However, Chris Brown had the last words, which really sums up how juvenile and trivial this Twitter beef really is.

Time to be a grown up! Getting off the path happens.. A Positive outlook shapes my future. — Chris Brown(@chrisbrown) May 29, 2012

July 3rd is all I care about! Don’t let them distract ya teambreezy! the music is real! Everything else is entertainment!