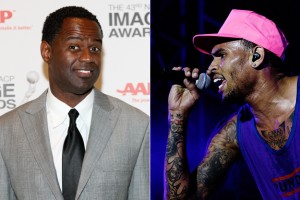 It started on McKnight’s own Twitter, in which the singer threw shade at Brown, writing, “Since everyone’s so opinionated I’m taking suggestions on what I should do next I’m thinking rent a lambo and beat the s— outta my girl…” Obviously, McKnight is likely referencing Brown’s infamous 2009 assault on then-girlfriend Rihanna.

However, McKnight didn’t just single out Brown. He also took aim at R. Kelly, who was suspected of statutory rape following the leaking of a sex tape with a possible minor. McKnight tweeted, “Or maybe have sex with a 14 year old girl an film it that’s acceptable these days.” McKnight followed with a message suspected to be about boxer Floyd Mayweather, posting, “Or let the court system let me make 35 million before I do my 87 days in a private cell for domestic abuse that’s acceptable these days.”

The man went in. While he raises a lot of pretty valid points, it also looked like he was trolling for some Internet attention, and he received it in spades from Team Breezy, who in turn went in on McKnight. He quickly became a target and a trending topic for Brown’s rabid fanbase, who punted McKnight with “has-been” and “one hit wonder” messages (and worse).

Brown himself got in on the action, echoing his fans’ own sentiments. “I see how this works now… When peoples careers get to the ‘nobody cares’ stage they use my name for publicity! Lol,” he wrote. “I can’t keep helping these old n—-s. Its miracle the way I’m bringing the dead alive!” he added, before quipping, “I would’ve gladly wrote you something that would make u look less irrelevant!” In fairness, those posts could be about just about anybody, since a lot of stars take shots at Brown’s domestically violent past and temper issues. However, he got much more specific next.

Brown’s following message referenced McKnight’s X-rated NSFW tutorial track, writing, “Listening to “let me show u how ur P works”!!!! THAT S— IS TRASH! If u need help just ask!”

While McKnight did start this feud, it’s a wonder that Breezy hasn’t learned his lesson yet. Lashing out at haters only gives them the attention that they crave. Just let it go!