BEYONCE BEHIND THE SCENES OF REVEL SHOW 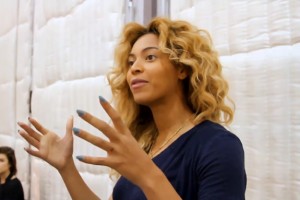 Beyonce is getting back to work this weekend, performing for the first time since birthing Blue Ivy at Revel in Atlantic City, N.J. Bey will take the stage tonight (May 25) through Monday, May 28.

It’s four shows over the holiday weekend and we all know about her relationship with the number 4. In this intimate, behind-the-scenes clip, we see Bey involved in every minute detail of the show, but she’s not micromanaging. She’s taking charge!

“It is exciting,” Bey says at the beginning. “I feel a little nervous. I’m enjoying being a mother, but this is like going back to my old job.”

She goes over the “flow” of the show with her team, expressing that she doesn’t want “to disappear from the stage too many times.” Bey states that she performs at the edge of the stage for most of the show, declaring that “the emotion of the show is to be among the fans.” Bey loves her fans, for sure.

This video shows Bey as businesswoman who knows what she wants.

The five-minute clip is mostly filmed in black and white, but notice, when we do see Bey in color, she’s often wearing blue. Even her dagger nails are a periwinkle shade, making us think of Baby Blue.

We also get a keyhole view of Bey as she warms up, reviews choreography and goes over the LED screens in a meeting as she scours the design of the staging.

The video shows her doing push ups, dancing and warming up. Even when she is sweaty and sans makeup, she is hot! We get to “revel” in all the glory that is Beyonce in this clip.