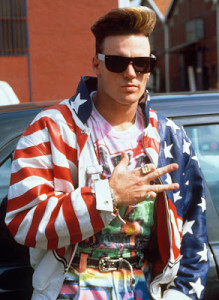 What do Erin Brockovich, the Terminator and Pee Wee Herman have in common? They all had a hand in making a mash-up video of Vanilla Ice‘s 1990 smash hit ‘Ice Ice Baby.’

The films featured in the video go back as far as the 1930s and include ‘Casablanca,’ ‘Goonies,’ ‘The Big Lebowski’ and ‘Creature From the Black Lagoon.’ Making its debut on YouTube on July 22, the clip has already garnered over 52,000 hits. This guy has way too much time on his hands.