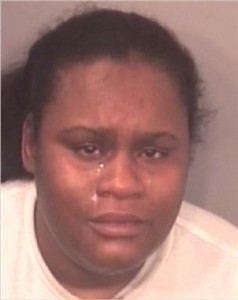 A woman who robbed the same liquor store three times in less than 24 hours was arrested at her home in Fall River, Mass., police said.

Latasha Singletary, 30, is charged with two counts of armed robbery and one count of robbery while masked. And Singletary was on pre-trial probation involving an armed robbery in April 2011 at the same store.

Investigators say that Singletary went inside Anna’s Liquors at 4 p.m. Tuesday with a knife and T-shirt pulled over her head and demanded that the 52-year-old clerk give her money.

Police were unable to find her after a search.

Singletary then returned the next day at 10 a.m. to rob the store again, police said. This time, in addition to money, cigarettes, lottery tickets and liquor bottles were also taken. While police were typing up the incident report for the morning robbery, they received a call at 2 p.m. that Singletary was robbing the store again.

Police descended on the area and, following tips from people in the neighborhood, found Singletary at her home.

“People really stepped up to the plate to help us,” Detective J.D. Costa told The Herald News. “We got a lot of community cooperation. It really made a difference.”

She was being held on $25,000 bail before her arraignment Thursday.